Best Things to Do in Munich 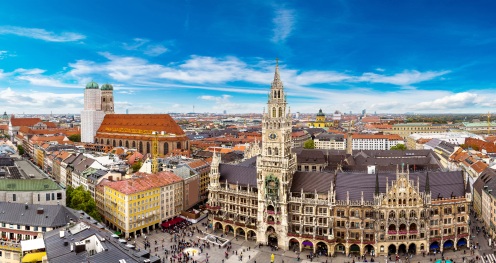 Bavaria’s capital city is a place bursting with fun-filled activities, plenty of amenities and German history and culture. It’s the most populous area within the region, so you can be sure that your time spent in Munich will be jam-packed full of things to do. Whether you’re staying for a week, a month or relocating there, the awe-inspiring mix of traditional and modern will stun you time and time again.

What to Do in Munich

There are countless attractions to go and visit in Munich. No matter how long you’re in the area for, there are some places you simply can’t leave without seeing first. We’ve outlined some of the must-sees below.
View our guide to Bavaria to find out more about the largest federal state in the country.

Not only has the Munich Residenz been described as one of the most spectacular places in Germany, but it’s known as one of the most breathtaking places in the whole of Europe! Originally constructed as a castle in 1385, it has since been turned into a palace with beautiful gardens. These days it plays home to a wide array of exhibitions that highlight the history of Bavaria as well as museums such as the Treasury, the Court Church of All Saints (Allerheiligen-Hofkirche) and Cuvilliés-Theater.
The vast Residenz complex is laid out around seven large courts and consists of three main sections: the Königsbau, the Alte Residenz and the Festsaalbau (Banqueting Hall). While there, make sure you leave yourself enough time to explore the grounds and courtyards. You’ll be able to enjoy the many fountains, ponds and gardens on offer.
Depending on the season you visit, the Munich Residenz is open until 5:00 p.m. or 6:00 p.m..

The Neues Rathaus at Marienplatz

Featuring neo-gothic styling, the Neue Rathaus (New Town Hall) architecturally dominates the north side of Munich’s Marienplatz. Designed by Georg Hauberrisser, it covers 9,159 m² (3.5 sq mi) and has more than 400 rooms inside. It’s recognised for its glockenspiel cuckoo clock that features a carousel of dancing figurines, who twirl around at 11:00 a.m., 12:00 p.m. and 5:00 p.m.. The well-known coopers dancers, which represent stories from Munich’s history, are accompanied by Münchner Kindl (symbol of the city’s coat of arms) and the angel of peace.

Since the city’s foundation, Marienplatz has been Munich's central square. The Neues Rathaus fills one side of it, but you’ll also find the Altes Rathaus (Old Town Hall) at the far end, forming a gate. For great views of the city, a trip up the elevator to the middle gallery of the building's 85-meter tower.
The area is popular with shoppers and tourists thanks to the range of stories, boutiques and restaurants close by. It’s also a place where festivals are held as well as a large Christmas market.

This iconic landmark is considered the symbol of Munich, with the two famous domes that sit on top forming part of the city's stunning skyline. Originally built in the 15th century, the Frauenkirche was constructed from red brick and followed Gothic styling. Though it only took 20 years to become fully erect, World War II saw the building become badly damaged. Since then, though, it has been beautifully refurbished and turned into a popular tourist spot.
Take a look around the small inner chapels and go on the hunt for the grave of Holy Roman Emperor Ludwig the Bavarian. If you want to see Munich in all of its glory, climb the south tower to enjoy views across Bavaria’s capital city that, on a clear day, lead right across to the Alps.
Despite the tragedies of WW2, there is one original feature that remainings standing: Teufelstritt, better known as the devil’s footstep. The footprint is said to have been left as a mark by the devil at the entrance when he came to inspect the church.

Located in the heart of one of Munich’s popular shopping districts is the beautiful Asamkirche, better known as Asam Church. Nestled between the buildings on Sendlingerstrasse, the late-Baroque building was fully constructed in 1746. Boasting stucco figures, frescoes and oil paintings, this elaborate personal chapel has a rich history.
Two brothers, Egid Quirin Asam and Cosmas, utilised their skills to develop this highly impressive building. While one was a sculptor the other was a painter, which is why there is so much attention to detail featured throughout the interior and exterior. On the outside, there is a large doorway that is adorned by huge columns and topped with a figure of St. John. Despite how majestic it appears, it’s the moment you step foot inside that your breath will be taken away. A wrought-iron grille, the projecting cornice under the ceiling and the high altar enclosed by four twisted columns are some of the most noticeable features inside.

Situated in the centre of Munich is the Englischer Garten, the largest city park in Germany. Covering an area of 910 acres, the beautiful garden stretches from the centre right through to the northeastern city limits. Trees and plants are grouped together to create a stunning backdrop, while 9km of winding streams and an artificial lake add the finishing touches.
This impressive landscape was first designed as a military garden in 1785. These days, however, it’s a popular place for walkers, joggers and cyclists. If you don’t fancy an activity, the garden is also a perfect place for relaxing and soaking up some sun.
If you are thinking about moving to Munich and enjoying what the area has to offer on a lifelong basis, check out the properties available for sale on  EW Immobilien Real Estate GmbH - the experts in selling property in Germany: https://www.ew-realestate.com/properties/for/sale/region/bavaria/city/munich